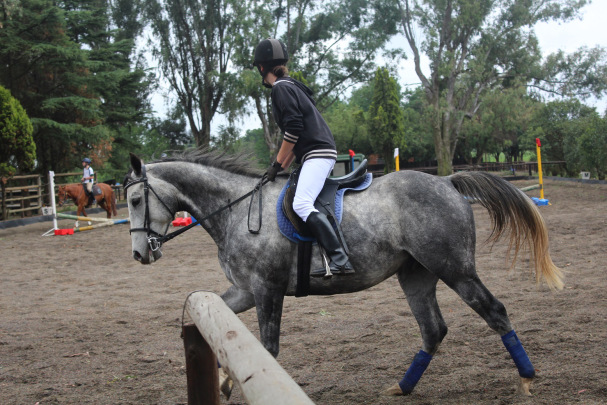 Clients closing their stables for the holidays + ALL my horses having downtime due to vaccines that require rest after administration = very little riding for this Horse Mutterer’s apprentice. In fact, I am down to one poor little grey horse to ride; the Mutterer’s white gelding. Luckily, he is a pleasant ride and can jump and do outrides, so I’m able to keep sort of in practice, but I’m down from 4-6 hours of saddle time daily to that many hours a week.

I’m in no position to complain – 6 hours a week? I know people who would kill for that much – so I won’t complain, I’ll rejoice. I’ll rejoice because my job is so awesome that I spend the holidays in eager anticipation of starting work again.

That brings me to a question that stops me in my tracks a little: Why do I ride?

Just last week, a big stallion took violent objection to the fact that his girth was pinching him and after the third rear in as many split seconds, I ate dust. I rolled, spat out some arena surface, fixed the girth, convinced the Mutterer that I was fine, and got back on. Why, though? When half a ton of animal sends you flying, why get back on?

Why do we even do this crazy sport? Life is dangerous enough without large flight animals in it. I have been kicked, trodden on, bitten, thrown, struck, knocked over, dragged, and squashed more times than I care to remember. I come home with aching muscles and a brain so fried that I’m asleep by eight-fifteen. Instead of soft lady’s hands, I have rough, calloused fingers and scars on my knuckles. Instead of attractive curves, I have ridiculous biceps, skinny calves and forearms like a man’s. I don’t go out on Sundays because I’m showing; I study in the dark so that I can ride in the light.

I would never have it any other way.

Why, though? Why is it that every time I’m thrown, I do everything I can to swallow the fear and throw my leg back over that animal’s rump and try again? Why do I want to spend my life baking in a dusty arena with my sweat trickling down to mix with the perspiration of the half-ton animal that chooses to work for me? Or breaking ice on water troughs on mornings so frigid even the dogs stay under the covers and think me mad?

Is it the sense of achievement when we finally get something right? The flash of satin on the rare occasions when we actually place? Or the surge of power when a gigantic animal breaks into a full gallop underneath me? Or the star-touching moment in midair over a triple bar? Or the glorious yielding, dancing balance as we perfect a half-pass?

What, then? The way a horse shines in the sun? The way he smells, the creak of leather, the swish of his mane and the grace of his rippling muscles as he bears down the long side of the arena like an approaching tsunami? The unbelievable, dragonfly lightness with which he lifts his muscular bulk into an effortless leap over that gigantic fence?

No, none of those, either.

Shall we delve deeper? Is it that nameless and indescribable thing that the equine heart does to the human soul? Is it the communication that runs deeper than language? The partnership between thinking human and moving beast? The threefold cord of God, human and horse that seems, for those star-touching moments, unbreakable? The wonder of an interspecies friendship that has understanding without words, love without expression and acceptance without comprehension?

Not even that. Oh, those are all what I love most about riding. But they’re not why I ride. In fact, the short answer to the question “Why do you ride?” is this one: I can’t say.

I ride for the glory of the King.