Quin's Blog post # 2: The Ultimate Answer to Riding, the Universe, and Everything 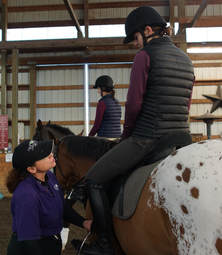 Friends, I'd like to share with you the Ultimate Answer to Riding, the Universe, and Everything, and no, it isn’t 42 -- although it felt like it took that many years for me to figure it out.  Until I learned the trick, though, I struggled and struggled and struggled to improve my riding ... especially in dressage.

But of course it was a struggle, you might say.  After all, riding is complicated, isn’t it?  There’s so much to learn, so much to understand … and then you get on a different horse or ride with a different clinician, and it starts all over again! Learning to be a better rider is going to be tough, no matter what you do, right?

Wrong.  What if I told you that the key to making it all understandable is so simple that a child can do it? In fact, children usually excel at it without any instruction whatsoever.

The trouble is that as we get older, life teaches us otherwise.  We learn to follow directions without talking back; we learn not to ask ‘stupid’ questions; we learn that knowing what we’re doing means knowing all the answers, and that asking questions is a sign of weakness, ignorance or disrespect.

Take me, for example.  As a young rider, I was a natural.  I was always able to get horses to do what I wanted -- mostly by feel and guess work.  If my instructor said something was good, I made it keep happening with very little technical grasp of how I was doing it or why it worked.  I was also the sort of kid I call a “pleaser”.  I had been taught by my parents to do as I was told, and that unquestioning obedience transferred to my riding lessons.  I wanted my instructors to like me, to be happy with my performance, and to be impressed with what I knew.  And I sure didn’t want to look stupid.  A great deal of my self-confidence was wrapped up in being a good rider, and I wasn’t willing to let that image slip.  If I was unclear about something the instructor said, I’d either go with what I was doing until it got corrected, or just figure it out later.  No way was I going to interrupt my instructor or my lesson to ask some silly question.  I just worked around what I didn’t understand, and as a result, my riding education was riddled with holes.

As an adult professional returning to a regular lesson schedule in search of a stronger understanding of dressage on a very, very difficult horse, my inability to ask questions didn’t get much better.  In fact, before it got better, it got a great deal worse.  The more technical my instructor’s demands became, the more the gaps in my understanding prevented success.  The more my success was impeded, the more frustrated I became -- and frustrated riders are extremely hard to teach.  I’d shut down and not even hear what the instructor was saying, or I’d only partially do what she said, or do it by rote without feeling or understanding why it was important.

My poor horse would get tense, then angry, then dangerous, and it would take a near-death experience, with me considerably outside my hot-shot, sticky-seated comfort zone, to get me desperate enough to listen to what I was being told to do.  I cried in lessons, got so angry that I’d have to dismount and stand quivering at the end of the arena until I got a hold of myself, or hide in the tackroom to cry in secret afterward.  I snapped at my instructor, was short-tempered with my horse, and generally felt hopeless about ever “getting it”.  It was hard to keep coming back, but I wanted the knowledge so, SO badly.

I don’t know how long I tortured myself before the answer (or, the question, as it were) finally came to me -- and when it did, it felt like defeat at first.  It felt like I was utterly giving up when I came to a full halt in the middle of an exercise, turned to my insanely patient and understanding teacher, and dropped the reins.  Then I cried as I admitted that I didn’t understand something that she’d said ten minutes ago, and that was why I wasn’t able to do it now.  I still remember her expression of surprise -- not so much that I hadn’t known it, but that I hadn’t asked.

She’d had no idea that I’d been confused by that one tiny piece of theory.  How could she?  And she’d been grasping at straws trying to sort out why her explanations hadn’t been working.  You see, there’s no way an instructor can know what’s going on in your head. If you don’t ask about something, or worse -- act like you understand when you don’t -- they have to guess where you need help.  And while you’re struggling to sort it out, your mind is busy with that instead of feeling what your horse is doing, connecting with him, and responding to the signals he’s giving as he tries to learn what you want him to do.  It becomes a vicious cycle of frustration for everyone, and the crazy part is that it’s so easy -- and at the same time, so hard -- to stop it.

For me, at first, I was so blocked in my own head that I couldn’t even identify the point of confusion, so at the beginning, I had to resort to taking a time out when I felt the frustration mounting.  Instead of just fuming until I could pull myself together though, I would stand there by my instructor, reins on the horse’s neck, mentally rewinding through the last several minutes and sorting emotions until I figured out where the block was.  It was hard.  Harder than the lesson.  Harder than the exercise.  But, once I settled on a question and worked through the uncomfortable cognitive dissonance of new learning, things always got better.

From there, I learned to stop as soon as I needed a question answered, and yes, it did get in the way of the riding occasionally, but I had to train my brain how to learn, and I couldn’t do it on a moving horse!

Finally, as I got more comfortable with formulating and asking questions, I was able to ask while I was riding, and that’s when the clouds really started to part and my progress took on a whole new trajectory.  I had discovered the Ultimate Answer:  asking questions.

And now, you know it too.  Asking questions is the most powerful piece of equipment you own, and it's free, never breaks down, and comes in a limitless supply.  You can't use it up, so instead of pressing on in a haze of confusion, or walking away still unclear about something you heard or did, STOP.  Call a halt and think of a question -- even if it takes a while -- then ask. Ask until you understand because that one little answer might be just the key you needed to unlock the door that's blocking your progress.