If you live in the Pacific Northwest or maybe London, you might as well stop reading right here. My suggestion will not translate to your world. If you live in a land where the sun shines at least occasionally, however, take advantage of it in the following manner. 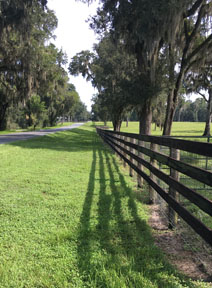 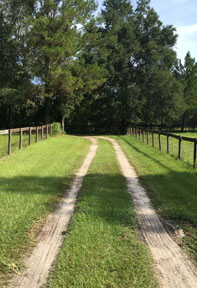 When riding lateral movements, your horse’s alignment and the maintenance of correct angles is often the difference between a marginal score and "pretty good." A wavering, vacillating shoulder-in doesn't cut it. Neither does a movement showing mostly a bent neck while the horse is barely on track and a half. Reference points help a lot.

The best solution is to ride your lateral movements straight at a  large arena mirror. If you don’t have that luxury, wait for a sunny day when the shadow from the top board of your pasture fence is cast on the ground eight or 10 feet from the fence itself. If it’s shoulder-in you want, put your horse’s outside hind leg firmly on the shadow and make it follow that line with the forehand appropriately to the inside. If you want travers, keep the forehand on the line and the hindquarters to the inside. Remember that haunches-in is to be ridden on a larger angle than shoulder in. Be sure that in travers the horse looks straight down the line of the shadow, not over flexed to the inside or counter bent to the outside. "The star on the horse’s forehead should light his path."

It’s not uncommon for a horse's canter in one direction to be crooked, his quarters traveling to the inside. To make him straight you must place the withers to the inside so they are centered between his two hips. This is another place to use the shadow line. Put his hindquarters directly over it and ride shoulder-in to move the forehand into the correct alignment.

Straightness is often a big issue in movements like canter departs, simple changes, and tempi changes. The shadow line can help again, but another visual aid is to ride down the narrow grass strip between the worn ruts on a farm road. Your concern of falling off the edge of the grass can be a great motivator to insist on your horse’s alignment. In all these cases awareness of the problem is the first step to being able to fix it.