It may come as no giant surprise that what something feels like and what it looks like are often not the same. That’s why we have video, why we have mirrors, and why we have frustrated instructors who can’t figure out why their students won’t do as they’re told.

You’re probably familiar with the scenarios in which in response to a piece of advice, riders answer indignantly, “I am.” When, in fact, they’re not. Similarly, they respond, “I’m not.” When, of course, they are. The rider is the last to find out.

I offer you a pair of photos taken of a (second no surprise) former hunt seat rider at a recent clinic. In the first one she is sitting up “straight”—or at least what her body thinks is sitting in the vertical. Those watching immediately recognized this as closer to a position appropriate for a line between fences.

[Ignore the difference in the horse’s outline in Photo 2. That was transitory and, in any case, we were concentrating on her balance and alignment before we worried about the horse’s.] 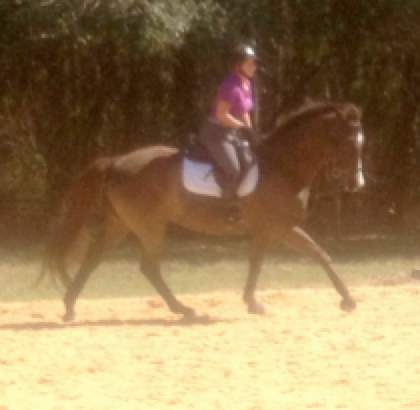 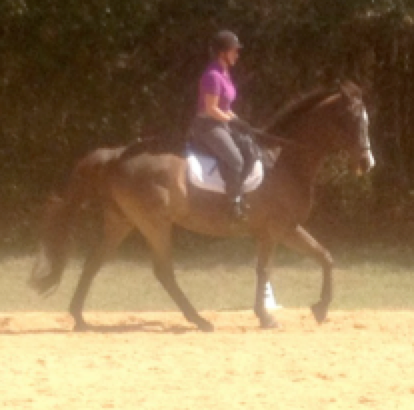 In this second picture I had just subjected her to a prolonged plea, begging/imploring/beseeching her, “Lean back . . . No, way back . . . Farther back . . . FARTHER BACK! . . . MORE! . . . Touch your pony tail to his croup . . . Lean absurdly, ridiculously, intensely far back, almost as though you’re trying to slide off over his rump.” And so on.

And this was the result.

She was totally shocked when I stopped her and showed her the image of what she actually looked like. As she acknowledged, she could look that forward on a tight turn in a jump off. She wasn’t remotely as behind the motion as her body had told her.

If there’s a moral, it’s believe your instructor’s feedback. Barring that, at least believe the photo he shows you!